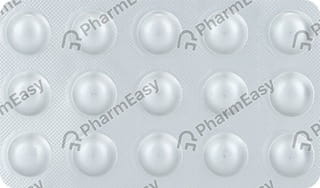 By FOURRTS INDIA LABORATORIES PVT LTD
15 Tablet(s) in Strip
₹255.85*
MRP ₹301.00
15% OFF
Inclusive of all taxes
30 days return policyRead More
All the Products are packed and stored Safely

L Montus tablet is a combination medicine used for relieving the symptoms of allergic rhinitis such as runny & stuffed nose, blockage in airways, sneezing, itching, watery eyes and other allergic sym

ptoms. It contains two active components - montelukast and levocetirizine. Both the components of this medicine belong to the "Antiallergic" class of medicines. L Montus tablet acts by blocking the release of the chemical substance responsible for producing allergic symptoms. This medicine should be taken at bedtime preferably, to oversee the side effect of dizziness. Inform your doctor if you have any kidney disease and are on dialysis, as the use of this medicine in such a condition is not recommended.

UsesContraindicationsSide effectsPrecautions and WarningsMode of ActionDirections for UseInteractionsStorage and disposalDosageOther Products

L Montus tablet is used for relieving the symptoms of allergic rhinitides such as a runny or stuffed nose, blockage in airways, difficulty in breathing, sneezing, watery eyes.

Side effects of L Montus Strip Of 15 Tablets

Precautions and Warnings of L Montus Strip Of 15 Tablets

Q:
Can I take L Montus tablet during pregnancy?
A:
There is limited information about the effect of the L Montus tablet on pregnancy. It is recommended to avoid taking this medicine unless prescribed by your doctor. Inform your doctor about your pregnancy or if you think you may be pregnant.

Q:
Can I consume alcohol with the L Montus tablet?
A:
It is advised to avoid alcohol consumption during the treatment as it might alter your alertness and increase side effects. Talk to your doctor if you consume it often.

Mode of Action of L Montus Strip Of 15 Tablets

Directions for Use of L Montus Strip Of 15 Tablets

L Montus tablet should be taken as directed by your doctor. Swallow it whole with a glass of water. Do not cut, break or chew the medicine. It should preferably be taken at night. It would be best if you took it at a fixed time for optimal results and not consume it more than that prescribed by your doctor....
Read more

Storage and disposal of L Montus Strip Of 15 Tablets

An overdose of L Montus tablet may cause drowsiness, aggression, restlessness, thirst and headache. If you think you have taken too much of L Montus tablet, contact your doctor immediately or visit the nearest hospital....
Read more

If you have missed any dose of L Montus tablet take it as soon as you remember. If it's time for your next dose, skip the missed dose and continue with your regular dose schedule. Do not take a double dose of medicine to compensate for the missed one....
Read more

Q: Can I take this medicine during an asthma attack?

A: No, it will not help in an acute attack of asthma. It is advised to take appropriate rescue medicines like inhalers given by your doctor during an asthma attack. Keep taking this medicine as well and do not stop it abruptly.

Q: Can I stop taking L Montus tablet if I feel better?

A: Do not stop taking L Montus tablet until and unless your doctor advises you. The doctor will gradually decrease the dose as per the need.

A: Medicine along with desired effects possess side effects as well, but not everyone gets affected. Yes, drowsiness is a common side effect of the L Montus tablet. If the drowsiness starts hampering your daily life, consult your doctor who might suggest another anti-allergic medicine that does not cause sleepiness.

Q: Is L Montus an antibiotic?

A: No, the L Montus tablet is not an antibiotic. It is an anti-allergic class of medicine. It is used to provide relief from allergic conditions.

A: The composition of the Montek LC and L Montus is the same which is montelukast and levocetirizine. These medicines are used for the treatment of allergic rhinitis. Based on the cause of your allergy and your medical history, your doctor shall prescribe suitable medicine for you. Do not self-medicate in any case.

Q: What is the best time to take the L Montus?

A: You should take this medicine at a fixed time of the day. You can take it either before or after meals.

A: You should take L montus only on days you have symptoms or as per the need. However, it is advised to take this medicine in the exact dose and duration prescribed by the doctor. Do not exceed the prescribed duration.

Q: What is the composition of L Montus?

A: The composition of L montus consists of montelukast and levocetirizine, which is an antiallergic medicine that helps to relieve allergy symptoms like runny nose, sneezing, watery eyes, cough or other allergic symptoms.

Q: How long does l Montus take to work?

A: L Montus starts working within an hour of its oral intake. However, it can vary among individuals depending on their physiology and other biological parameters.

Q: Is L Montus an antihistamine?

A: Yes, L Montus is an anti-histamine, that acts by blocking the release of the chemical substance (histamine) responsible for producing allergic symptoms.

Q: What are the uses of L montus tablet?

A: L montus tablet uses are to relieve the symptoms of allergic rhinitis such as runny & stuffed nose, blockage in airways, sneezing, itching, watery eyes and other allergic symptoms.

Q: What are the side effects of L montus?

A: L montus side effects include dizziness, headache, dry mouth, tiredness, blocked nose etc. However, these symptoms are usually mild and resolve on your own. Also, it is not important that everyone experience the same.

View All
Last Updated on: 04 Apr 2022 | 06:27 PM (IST)
Disclaimer
The information provided herein is supplied to the best of our abilities to make it accurate and reliable as it is published after a review by a team of professionals. This information is solely intended to provide a general overview on the product and must be used for informational purposes only. You should not use the information provided herein to diagnose, prevent, or cure a health problem. Nothing contained on this page is intended to create a doctor-patient relationship, replace or be a substitute for a registered medical practitioner's medical treatment/advice or consultation. The absence of any information or warning to any medicine shall not be considered and assumed as an implied assurance. We highly recommend that you consult your registered medical practitioner for all queries or doubts related to your medical condition. You hereby agree that you shall not make any health or medical-related decision based in whole or in part on anything contained in the Site. Please click here for detailed T&C.
Please add item(s) to proceed