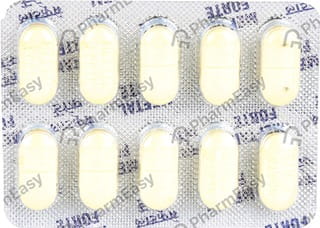 By BLUE CROSS LABORATORIES PRIVATE LIMITED
10 Tablet(s) in Strip
₹37.40*
MRP ₹44.00
15% OFF
Inclusive of all taxes
7 days return policyRead More
All the Products are packed and stored Safely

Meftal Forte tablet is a combination medicine used for relieving pain. It is used to relieve pain associated with muscles and joints, headache, migraine and back pain. This tablet is also useful in t

eating pain due to sprain, strain and injury, post-operative pain and dental pain. This medicine contains mefenamic acid and paracetamol as its active molecule. It works by reducing the formation of certain chemicals that causes the sensation of pain. Meftal Forte tablet must be taken as directed by the doctor and in doses and duration as prescribed. It should preferably be taken with or after having your meals. Take it regularly at a fixed time. Do not skip a dose or consume more than that recommended by the doctor.

Side effects of MEFTAL FORTE TABLET

Q:
Can I take Meftal Forte tablet during pregnancy?
A:
Meftal Forte tablet should not be used in a pregnant woman as it can cause cardiovascular malformations in the growing foetus. It can also delay labour and can increase bleeding tendency in both mother and child if used during labour.

Q:
Can I drive after consuming Meftal Forte tablet?
A:
Meftal Forte tablet is not known to affect your driving ability. However, if you experience dizziness, drowsiness, fatigue and visual disturbances avoid driving.

Q:
Can I consume alcohol with Meftal Forte Tablet?
A:
There is no direct interaction of Meftal Forte tablet with alcohol. However, there is a risk of liver damage in chronic alcoholics and people with liver problems if you are taking this medicine with alcohol.

Directions for Use of MEFTAL FORTE TABLET

The symptoms of an overdose of Meftal Forte tablets include lethargy, drowsiness, nausea, vomiting and stomach pain. In case of an overdose, contact your doctor immediately or visit the nearest hospital. Significant high doses of this medicine can lead to liver damage or liver failure....
Read more

Do not take a double dose to compensate for the missed one. If you have missed the dose, take the next dose as soon as you remember.

Meftal Forte tablet works by the combined action of its two ingredients. Mefenamic acid and Paracetamol act by inhibiting the prostaglandin synthesis, a chemical responsible for pain, inflammation and swelling....
Read more

A: No, Meftal forte is a pain-relieving medicine it will not help relieve symptoms of chills.

Q: Can I use Meftal Forte for sinusitis?

A: No, Meftal forte does not help reduce sinusitis. Sinusitis is a condition triggered by cold or allergies and makes the nasal passage swollen.

Q: Can Meftal Forte be taken for stomach ulcers?

A: No, Meftal forte is not an anti-ulcer medicine and neither it helps reduce stomach acid formation thus it is not effective for the treatment of ulcer. Always consult your doctor before taking this medicine.

Q: Can I give Meftal Forte tablet to my children?

A: It is not to be used for children. Do not give any medicine to your child without consulting a child specialist as the organs and other body structures are not fully developed in children.

Q: How does Meftal Forte work on a headache?

A: Headache or any pain is caused due to the production of inflammatory mediators such as prostaglandin. Meftal Forte blocks the formation of those chemicals and relieves headaches.

Q: Is Meftal Forte an antibiotic?

A: No, Meftal Forte is not an antibiotic medicine. It helps in relieving pain.

Q: Can I have Meftal Forte twice a day?

A: You should take Meftal Forte as prescribed by your doctor. The dose of this medicine depends on your underlying condition. Refrain from using too much of this medicine if you do not experience any pain relief.

A: Yes, there can be variations in blood cell count after taking Meftal Forte. You should tell your doctor before going for any blood tests as it may vary due to this medicine.

Q: How long does Meftal Forte take to show its actions?

A: Meftal Forte usually starts working within an hour. However, it can vary among individuals depending on their physiology and other biological parameters.

Q: Can I take Meftal Forte in periods?

A: Meftal Forte is used to relieving pain associated with muscles and joints, headache, migraine, back pain, pain due to sprain, strain and injury, post-operative pain and dental pain. It would be best to take a doctor's advice before taking any medicine to relieve period pain. Refrain from self-medication.

A: Meftal Forte contains mefenamic acid and paracetamol. It is used to treat mild to moderate pain and can also subside symptoms associated with pain like fever. However, patients must take this only on doctors recommendation.

A: No, Meftal Forte is not addictive but it is advised not to give this medicine if anyone else has the same condition as you without consulting a doctor.

Q: Is Meftal Forte a painkiller?

A: Yes, Meftal Forte tablet is a pain-relieving medicine that is used to relieve pain associated with muscles and joints, headache, migraine and back pain.

A: Yes, Meftal Forte tablet can be used by breastfeeding women. However, it should only be used if recommended by the doctor.

A: There is limited information on the effect of Meftal Forte tablet on pregnant women. Hence, this medicine should only be used in pregnancy if recommended by the doctor after assessing the need and the risk.

Q: Does Meftal Forte cause sleepiness?

A: Yes, an individual may experience sleepiness/drowsiness after taking Meftal Forte tablet. If you experience any such symptoms after taking this medicine, it is recommended to avoid driving, operating machines or performing any such tasks that require mental alertness.

A: Throat pain may occur due to various underlying reasons like throat infection, overuse of the voice, etc. Thus, Meftal Forte tablet should not be used for the treatment of throat pain unless recommended by the doctor.

Q: Can we take Meftal Forte on an empty stomach?

A: No, you should always take Meftal Forte with or after food.

A: Meftal Forte Tablet contains mefenamic acid and paracetamol and is generally used for symptomatic relief from mild to moderate pain. Dolo 650 tablet contains only paracetamol and is generally used for the treatment of fever and pain. You should only take Meftal Forte if your doctor prescribes it as the same shall be based on your diagnosis and your medical history.

A: You can take Meftal forte daily, but for a prescribed duration only. Do not take for longer than a week at a time. If you do not feel any improvement even after a week of taking it, inform the doctor. But do not take it endlessly on your own, without consulting a doctor.