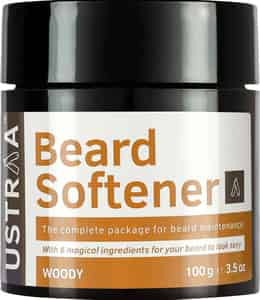 Visit USTRAA Store
Out of Stock
₹337.5
MRP ₹450
25% OFF
Inclusive of all taxes
Similar Products
Frequently Bought Together

Providing complete beard and skincare, Ustraa Beard Softener will make your beard strong and shiny when used daily. It also hydrates and maintains the condition of the skin beneath your beard. Mineral oils, sulphates and parabens are all absent from this beard softening product. Your beard, which is dense and long, requires regular grooming to be healthy and attractive. With top-notch ingredients, Ustraa Beard Softener (Woody) provides everything you need to maintain your beard soft and manageable.

Q1: What is the Beard Softener's role in my life?

Ans: Ustraa Softener nourishes and moisturises your beard for a longer period. In comparison to Beard Oil, it also offers your beard a matte, non-shiny appearance.

Q3: Is there anything in here that I should be concerned about?

Ans: This Beard Softener includes no dangerous chemicals; instead, it provides beneficial ingredients for your beard.

Q4: How often should you use beard softener?

Ans: To have your beard feeling strong, preferably use this softener twice a week.

Product Details
Brand
Ustraa
Expires on or After
27/02/2023
Country of Origin
India
Manufacturer Details
Disclaimer
THE CONTENTS OF THIS WEBSITE ARE FOR INFORMATIONAL PURPOSES ONLY AND ARE NOT INTENDED TO BE A SUBSTITUTE FOR PROFESSIONAL MEDICAL ADVICE, DIAGNOSIS, TREATMENT, OR PREVENTION OF A DISEASE OR MEDICAL CONDITION. PLEASE CONSULT A PHYSICIAN FOR THE TREATMENT AND/OR MANAGEMENT OF ANY DISEASE OR MEDICAL CONDITION WITHOUT DELAY.