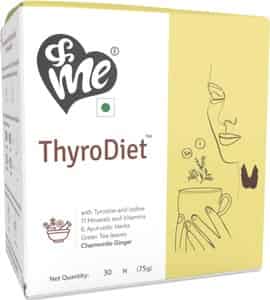 Andme Thyrodiet Tea Bags have intact, unbroken leaves that preserve the complete flavour profile of the tea; they also don't dry out as quickly and retain vital anti-oxidants. No dust, no fannings: these Andme bags are handled in a way that minimises drying, ensuring that flavour components such as tannins and essential oils are preserved to the greatest extent possible, offering you a more flavourful experience. These tea bags are infused with Guggulu and Kachnar that aid in absorbing iodine in the body.

Q1. Is it possible to reuse teabags?

Ans: Teabags should only be used two times in any 24 hours before being discarded. If kept in a safe and healthy environment, tea bags can be reused multiple times. This limiting time helps ensure that each reuse prioritises safety and a pleasant taste.

Q2. Is it harmful to leave tea bags in for an extended time?

Ans: There's no danger in leaving a teabag in for an extended period. On the other hand, over-steeping tea can make the tea taste bitter and have an astringent impact on the mouth, leaving you dry and puckery. It may also leave stains on your cup or teeth. The tea bags should only be steeped once.

Q3. How long should you leave the teabag in the water?

Ans: Allow at least three minutes for the tea bag to steep in boiling water, allowing the tea to reach its full potential. Give the teabag a slight shake before placing it in the cup. Any compacted tea will release, allowing the water to flow easily through the tea leaves.

Q4. Can  Andme tea bags be soaked in cold water?

Ans: Yes, cold water can be used to prepare tea. Although cold brewing tea is less well-known than cold brewing coffee, it does exist. It's also known as sun tea or refrigerator tea and the two terms are interchangeable.