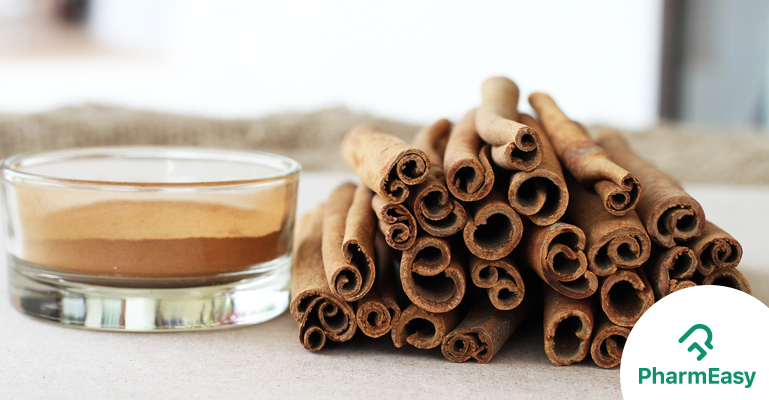 Nature is abundant with medicinal herbs that can treat conditions ranging from the common cold to the dreaded high blood pressure. But does it have an answer for diabetics as well? Diabetes is a disease where blood sugar levels rise above normal levels and cannot be self-regulated by the body. High blood sugar levels for a prolonged period impact the kidneys and nervous system and may even lead to loss of vision.

Cinnamon, used as a spice in traditional Chinese and Indian cuisine, has shown to be useful in managing blood sugar levels in type 2 diabetics.

Type 2 diabetes is a condition where either the body stops producing insulin or becomes resistant to the effect of insulin. Without insulin, the body can no longer absorb and store the excess sugar from the bloodstream. Read more about the signs and symptoms of type 2 diabetes.

Cinnamon has shown to increase the insulin sensitivity of the body, thereby helping the organs to absorb excess sugar from the blood and slowly use it, thus regulating blood sugar levels.

Research has shown that cassia cinnamon is useful in regulating sugar levels in people with type 2 diabetes. This is significant because almost 80% of the people who have diabetes have type 2 diabetes.

Cassia cinnamon is darker, more aromatic, and harder than the Ceylon cinnamon. It has a woody texture, is peppery, and has a spicy-sweet aromatic flavour.

Numerous studies have shown the effectiveness of cassia cinnamon in controlling type 2 diabetes.

Cinnamon, however, is a highly potent spice and should never be consumed by itself, as it can be toxic if consumed in large quantities. Ensure you have cinnamon with some food or tea and never just by itself.

Consume a teaspoon of cinnamon with honey along with meals. Cinnamon tea prepared by boiling cinnamon sticks is another idea you can try.

Although studies have shown the effectiveness of cassia cinnamon in controlling type 2 diabetes, there is not adequate research or evidence to use cinnamon as an alternative to medication.

Consult your doctor before you start taking cinnamon on a regular basis and monitor your blood sugar levels regularly. Cinnamon can be dangerous for the liver and is not compatible with certain medicines.