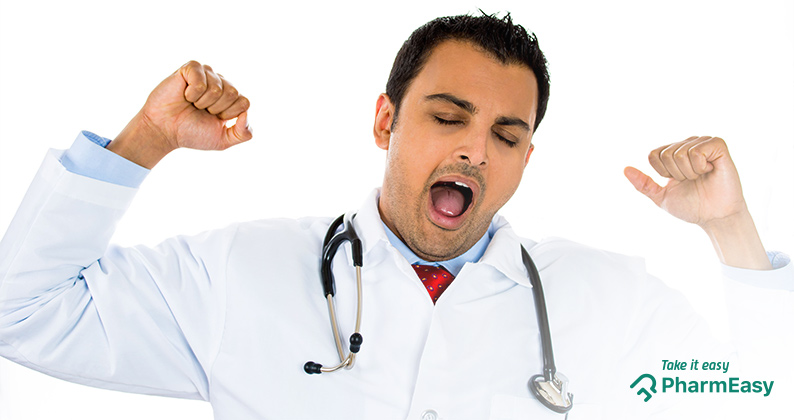 Have you ever wondered why you’re often advised to get at least 6-8 hours of sleep a day? How can a lack of sleep affect your body?

Sleep is one of our basic needs, like food and water. We cannot live without sleep. An average person needs 6-8 hours of sleep every night to stay healthy both physically and mentally. It is estimated that a person spends 25 years of his/her life sleeping.

For years, scientists have been trying to find the real purpose of sleep. So far, what has been discovered is that in this unconscious state our body rejuvenates itself, including brain cells. This is the reason that lack of sleep can cause distress to you and make you feel forgetful and distracted.

A study on the matter has also revealed that sleep deprivation makes it difficult for the brain cells to function normally and communicate, which can lead to mental lapses.

Now that you know the role a good night’s sleep plays, and its subsequent importance, wouldn’t you like to know the negative effects of sleep deprivation?  Here is what lack of sleep does to your brain.

Have you ever wondered how our grandparents have such sharp memories? What is it that they did differently that helps them remember the date of what we might consider the most random of events, while we struggle to recall what our parents told us just a few days ago? Studies have proven that sleep solidifies our memories.

It is this time when our brain strengthens certain neural connections and consolidates the lessons learned in the day. It also prunes out unnecessary memories that don’t need to be stored for later use. So, if you do not get proper sleep, your brain will fail to do this job properly and will be more likely to mess up even the most recent events.

Therefore, the long-term memories from this time in your life (sleep-deprived year) will be spotty with a lot of missing and confusing aspects.

The thought of contracting a disease like Alzheimer’s is terrifying, isn’t it? As it turns out, one of the long-term sleep deprivation effects on the brain is the increased risk of Alzheimer’s Disease.

It has been discovered that sleep is when the mind clears up the toxins faster than when we are awake. What this means, is when you sleep, your brain removes all the waste material caught up between the brain cells and sends it out through cerebrospinal fluid.

It has also been discovered that most of this waste material is made up of β-amyloid protein which is responsible for Alzheimer’s disease. So, when you do not sleep, your brain does not flush properly, increasing your chances of suffering from Alzheimer’s later in life.

Do you ever feel like you’re unable to comprehend or work on your tasks for the day, especially when you should have woken up fresh after a night’s rest? Several people have observed that sleep deprivation affects their cognitive skills on a daily basis.

Cognition is our ability to process thoughts and experiences through our senses. Decreased cognition is one of the effects of sleep deprivation on the teenage brain that is worrisome. Teenagers, mostly being students, need their cognitive abilities to constantly learn and grow.

A lack of it affects attention and working memory and makes studying and learning lessons a living nightmare. Sleep deprivation has the same effect on adults’ cognitive abilities. Therefore, sleep-deprived adults may struggle with multitasking jobs like driving and crucial decision making.

Do you often tend to ignore the role of sleep in keeping you on top of your mental health? Do you feel irritated, or anxious while dealing with situations after a night of inadequate sleep? Sleep deprivation and mental health problems like depression go hand in hand.

In fact, depression makes sleeping patterns go haywire. It has been found that people with depression either sleep very less or a lot. A study found out that people who sleep less than six hours every night or more than 8 hours per night are more likely to be depressed than the people who come in between.

Now, this is a typical, what came first; chicken or egg problem. Sleep deprivation worsens depression, which in turn causes a lack of sleep.

Children also need a good amount of sleep for proper brain growth. We all know kids get cranky when they do not sleep properly, but there are serious consequences of sleep deprivation in children.

Some studies have revealed that kids who do not get proper sleep because of breathing issues are more likely to show symptoms of ADHD. There are also various studies that have pointed out the fact that a good night’s sleep translates to a great performance at school.

So, sleep deprivation can lead to various mental disorders in children and can, of course, affect their much-needed cognitive abilities and focus.

This proves that sleep is your best friend and not just in the early hours of the morning. All of us, no matter our age, need a good amount of sleep to perform our duties properly and behave like responsible adults. There is an important lesson behind the old saying ‘Early to bed, early to rise, makes a man healthy, wealthy, and wise’ after all. So, what are you waiting for? Switch off your devices and go have a good night’s sleep already.

Read More: 5 Best Brain Foods To Include in Your Diet