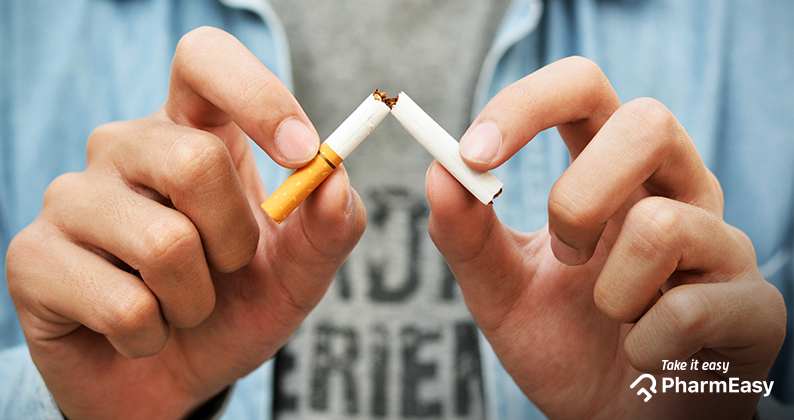 31st May is known as the “World No Tobacco Day” and for a good reason too. Did you know that more than 10 million die each year in India due to tobacco? India is home to 12% of the world’s smokers, according to the World Health Organization (WHO). You have heard numerous people tell you that smoking affects your lungs. You have seen the gross pictures on cigarette packs but smoked anyway. But did you know that smoking affects your brain too?

What Does Nicotine Do To Your Brain?

Nicotine works like the various neurotransmitters that are already there in our brain. It activates dopamine signals that result in a pleasant sensation in your brain. With the passing of time and more smoking, the brain reduces acetylcholine receptors to compensate for the increased signaling activity. As a result, nicotine tolerance is created in the brain.

The brain ends up needing more nicotine. As nicotine mimics the work of dopamine that provides the feel-good factor, your brain starts associating smoking (nicotine use) with feeling good. The nicotine in cigarettes changes your brain and makes you suffer from withdrawal symptoms when you try to quit. You start feeling irritable, anxious, and body has a strong craving for nicotine. As a result of these symptoms, most people reach for another cigarette, and then another and are unable to quit.

Brain size and volume is associated with higher intelligence and better cognitive functioning. The average brain volume in adult males is 1260 cubic cm and 1130 cubic cm in adult females. According to a 2017 study, the longer you smoke, the more your brain loses volume with vital tissues shriveling up.

Smoking affects the subcortical brain regions. The subcortical areas of the brain are associated with pleasure, hormone production, emotion, and memory. Smokers thus develop age-related loss of brain volume that leads to increased risk of dementia.

Dementia Due to Smoking

Dementia is a syndrome that is characterized by deterioration in thinking, memory, behavior, and the ability to perform everyday activities. It is said to affect older people mainly, but it is not a normal part of aging. Since smoking affects the subcortical regions of the brain that are associated with memory, it puts smokers at a higher risk of dementia.

In 2015, a research team reviewed 37 studies that compared smokers and non-smokers and found that smokers were 30 % more likely to be affected by dementia. Quitting smoking can decrease the risk of dementia in the person.

In 2012, the cognitive data of about 7,000 men and women were studied for 12 years. The researchers found that smokers experienced a much more rapid cognitive decline than non-smokers. Middle-aged male smokers were found to be more at risk than female smokers.

Smoking Increases the Risk of Stroke

If you smoke say, 20 cigarettes a day, you are 6 times more likely to have a stroke than a non-smoker. Tobacco contains over 7,000 harmful chemicals, including formaldehyde, cyanide, arsenic, and carbon monoxide. These toxic chemicals get transferred from the lungs to the blood. They make platelets more likely to stick together. Platelets help in clotting the blood in case of blood loss, but if the platelets stick together, it increases the chance of clot-forming.

Smokers are at a higher risk of developing atherosclerosis where arteries become hardened and narrow. It restricts smooth blood flow making the formation of blood clots more likely. If a clot forms in an artery leading to the brain, it can block the blood supply to a part of the brain resulting in a stroke. This is known as ischaemic stroke. Smoking is said to double the risk of having an ischaemic stroke. If a person quits smoking, within 5 years, his/her risk of stroke will start decreasing to that of a non-smoker.

Smoking releases a severe amount of toxicity in our bodies. There are about 60 known cancer-causing substances in tobacco. The chemicals that make up a cigarette are:

This sticky brown substance forms when tobacco cools and condenses. It causes cancer.

It is a poisonous alkaloid derivative of tobacco.

Arsenic containing pesticides are used during tobacco farming, and traces of it are found in cigarette smoke. Arsenic is commonly found in rat poison too.

This is used as a solvent in nail polish remover among other things.

Usually found in tanning lotions too.

It is a radioactive element.

This poisonous is gas is released as a result of burning tobacco. It enters the bloodstream and affects the normal functioning of the brain and body.

It is used by certain manufacturers to boost the impact of nicotine in cigarettes. It is extremely toxic.

A Highly toxic chemical that is also used in making rubbers, inks, dyes, and explosives.

Also used in the aviation industry.

Smoking affects the brain and hence, mental health. Sometimes, bad mental health makes people take up smoking and worsen their conditions. Other times, it is the other way round.

The nicotine from cigarettes alters the brain. It makes the brain connect ‘feeling good’ to smoking. Quitting smoking becomes tough after some time because smokers start suffering from withdrawal symptoms. They then find solace in smoking and fall prey to the dangerous cycle and become addicted.

How many times have you heard somebody say, ‘I’m feeling stressed out, I need to smoke right now’ or ‘Smoking makes me feel relaxed’?

Stress is very common and can cause symptoms like headaches, irritability, anxiety, and/or breathlessness at times. Smoking increases the occurrence of these symptoms. Smokers start feeling the symptoms if they do not smoke for a long time and associate smoking with being a reliever of stress.

Nicotine mimics the work of dopamine, prompting the brain to switch off its mechanism that makes and secretes dopamine. In the long term, the supply of dopamine decreases in the brain and inspires people to smoke more. There is a complex relationship between depression and smoking. Smokers with depression have more trouble in quitting as withdrawal symptoms become more severe in them.

Also Read: Treatment for Depression – Medication, Therapy, and Others

Research has shown smoking increases tension and anxiety. The relaxed feeling that smokers talk about after a quick smoke fades away just as quickly. It is hugely short-lived and only adds more jitteriness in the smoker, making him/her reach for more.

Do e-cigarettes Affect the Brain?

Yes, e-cigarettes have negative effects on the brain too. National Institute on Drug Abuse has reported that the nicotine in e-cigarettes goes about making similar harmful changes in the brain. E-cigarette vapor contains harmful chemicals too hence it is not a way out.

Must Read: 7 Health Effects of Smoking