Delhi can’t breathe! The thick grey haze that has enveloped the National Capital Territory has left the whole of India worried. Recently, Delhi’s Air Quality Index shot up to 494 (severe). People are being taken to hospitals with breathing issues, schools are closed and flights have been canceled. Delhi is in the middle of a climate emergency. What has triggered it? And how can the residents of Delhi save themselves from pollution? Read on to find out.

What contributes to Delhi’s pollution?

The primary cause of Delhi’s ‘hazard’ levels of pollution is the burning of stubble (the stalks of the crops after they are harvested) in agricultural fields. This happens extensively in Delhi’s neighboring states, Punjab and Haryana. The wind carries the thick smoke from burning stubble towards Delhi and worsens its air quality.

A few other factors causing pollution in Delhi are-

Why should we be worried?

Delhi’s pollution levels are indeed a health emergency. Every year during November and December, Delhi’s PM2.5 (pollutant particles with a radius of 2.5 micrometers) level hovers around 300 – the normal range of PM2.5 level is 0-50. This puts Delhi in the ‘severe’ category when it comes to air pollution.

These particles directly enter our bloodstream through the lungs and cause severe damage.  Already 2.2 million children in Delhi have contracted some form of lung disorder.

It is also lowering people’s immunity and making them vulnerable to diabetes, heart disorders, and epilepsy.

According to the World Health Organisation, the rising levels of pollution is responsible for nearly one-third of the cases of stroke, heart disorders and lung cancers in Delhi.

What’s being done to address this health emergency?

Yes, the government is actively trying to reduce pollution. The following are a few measures taken by them: 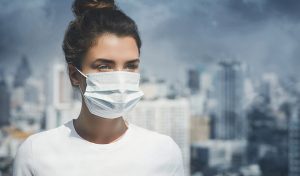 How can people protect themselves?

We can implement the following tips to minimize your exposure to pollution:

Air pollution in Delhi poses a risk to everyone. Adopt the precautionary measures mentioned above to keep yourself safe from pollution’s harmful effects.