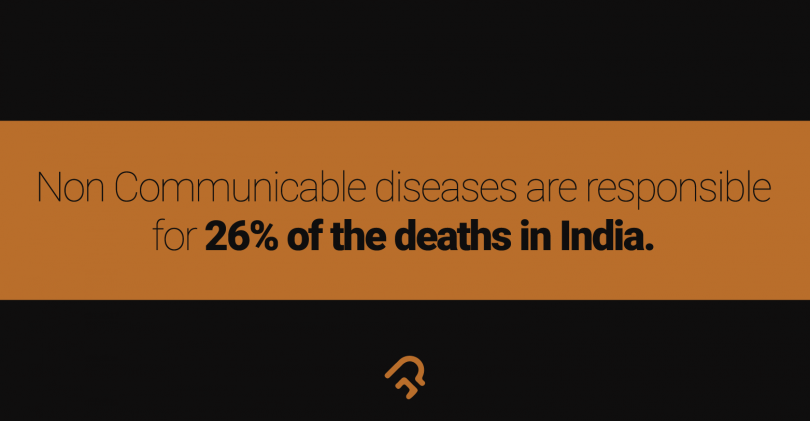 Healthcare In India as a whole has gotten accustomed to the clasp of diseases that is slowly tightening its grip on the citizens, taking them down with vicious blows time and again.
An article in the Forbes India recently mentioned a few statistics about the current health scenario in India that the WHO has mentioned. Non Communicable Diseases account for 60 percent of the deaths in India. 26 percent of Indians die as a result of one of the four main non communicable diseases – cancer, stroke, respiratory problems and diabetes.

There are 62.8 million diabetics in India with about 80 million pre-diabetics. Each year around 6,00,000 people in India die due to Cancer each year.  Every 10 minutes one woman dies due to breast cancer. The saddening fact is that almost seven out of ten cancer patients in India dies as a result of late detection of the disease. How many of us even know that more than half of the cancers are associated with lifestyle choices, including the use of tobacco and obesity?

These alarming statistics show that apart from just improving the Healthcare In India facilities India needs to go a step further and make its citizens want to lead a healthy life and take steps towards it. Inculcating healthy living as a daily habit and making it a personal goal is the necessity of the hour. Just a collective will to take a small step towards healthy living can make a huge difference.

These effects add up to and impact social and economic standpoints catastrophically too. As mentioned in the article, challenging lifestyle diseases is a matter as crucial and important as tackling the issue of climate change. It just hasn’t got its share of importance and acknowledgement yet.

The first step towards this would probably be following China’s footsteps and making health screening at pre-determined intervals compulsory. This can be catalyzed by first providing infrastructure and an efficient talent pool. WHO has set the doctor-population benchmark to 2.5 doctors per 1000 people. Healthcare In India today is struggling to maintain 0.65 doctors per 1000 citizens.

If Healthcare In India is to be improved and strengthened right from the grass root level, India first needs to target the villages and the healthcare facilities in India. The primary healthcare centers (PHCs) are deficit. Shockingly 8% of them don’t even have doctors or medical staff, 18% don’t have a pharmacist while 39% don’t have lab technicians!

What India needs is not a way to tackle diseases (not saying that we are efficient at that) but more importantly, we need to work on ways to prevent these diseases from occurring. To educate and instill in the citizens the will to stay healthy and give healthcare its due importance. Healthcare in India is at a crossroad where it needs to pick up arms and rage a war against diseases, right now!