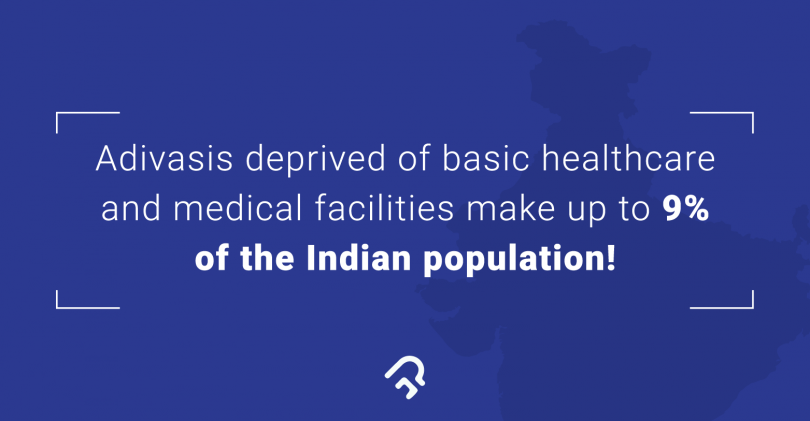 Adivasi Healthcare makes up to 9% of the Indian population. While the urban population strives for better infrastructure, larger shopping arcades, entertainment facilities, this sect of the society sadly doesn’t even have basic healthcare.

Meenakshi, a twenty six year old resident of one of the 19 settlements of Kurumbas, Edavani ooru is a part of a particularly vulnerable tribal group (PVTG) in Attappady block. When she was expecting, doctors at the primary healthcare center, which is located nothing less that sixteen kilometers from her house, suggested that she visited the tribal specialty hospital. Her condition was that of severe concern threatening her and her child’s wellbeing. Nagan, her husband accompanied her to the hospital situated 25 kilometers away from her settlement, where she was refused admission for the lack of experts and people to look after her. On her way back, she developed labour pain and needed to be rushed back. Delivering in just the seventh month, Meenakshi gave birth to a stillborn.
Meenakshi is one of the other thirty odd mothers who lost their babies in a single year in Attappady. While the rate of infant mortality ranges so high, the only gynecologist the specialty hospital has, hadn’t turned up for weeks together according to the tribespeople. The posts of surgeons, anesthetics and pharmacists were vacant at the specialty center.

An old article on the similar topic cited the grim scenario of Pappa of the Muduga tribe, living in Varagampadi Ooru, also in Attappadi. Pappa has five children who she delivered at home, without any attendant. She used to work till the labour pain was unbearable, when she thought it was time for the delivery, she would get into her dark little house, hold on to a knotted string hanging from the ceiling for strength and squat the baby out, cut the umbilical cord herself and also discard the afterbirth herself.
When interviewed, she assumed the air of a doctor and stated that all one needed to do to stop the bleeding umbilical cord was put some kerosene oil on it and then put some dough!
She thinks visiting hospitals is futile as they anyways don’t do much, don’t listen and deliver babies lying down and not squatting!

Adivasi Healthcare women’s lack of trust in hospitals due to their inefficiency and self confidence that is uncalled for, lead to deliveries at home without midwives or with midwives without much knowledge. In most of these regions, practices such as leaving the mother dirty till way after the child is cleaned, applying mud to stop the bleeding umbilical cord, tying it with dirty pieces of string, cutting it with rusted knives or razor blades, tying stones to the umbilical cord so it falls off, etc are still prevalent.

If there is such void in even ensuring that the babies are alive post delivery, how much optimism can they harbor that the doctors and government will help them tackle the many diseases ranging from Malaria to sickle cell anemia? Adivasi healthcare is yet another issue that needs to be given its due importance in India.

PharmEasy strives to reach out to the remotest corners of the country and make affordable healthcare a reality for everybody. It’s a long way to go…but the journey has begun!