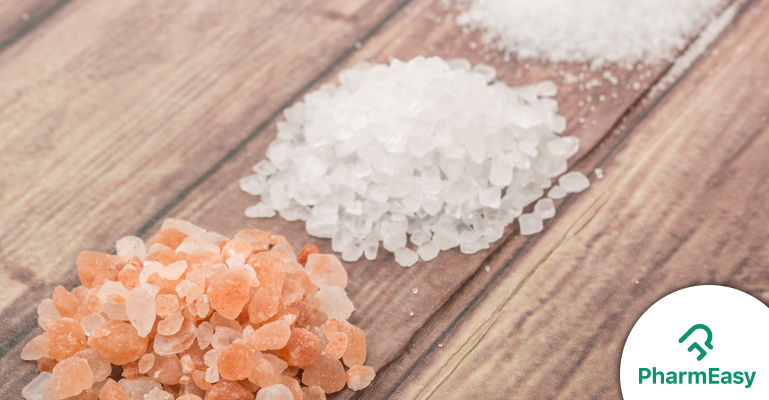 Table salt vs. sea salt – the debate is real and a serious one. The importance of salt is realized when it is missing from our food. Used as a flavoring agent in cooking and baking, it neutralizes bitterness, acts as a preservative and enhances the taste of dishes. Salt is made up of sodium and chloride, both minerals which are essential for biological functions like nerve communication, proper blood pressure, and other metabolic processes. Human bodies are 28% mineral salts and other material and 72% water. Our body has fluid material inside the cells and outside the cells. When both these fluids are balanced, the body is healthy. It is salt which is responsible for achieving this balance. Eaten in moderation, it is life-nourishing. Consumed in excess, it increases the blood pressure as it binds with water in the blood.

Salt has got a bad press in recent times due to its link to blood pressure and hypertension. Doctors believe that the salt in the processed food that is more worrisome than the salt in our regular diets. Those who have hypertension must stay away from junk and processed food as it has a very high percentage of sodium.

Salt is obtained by evaporating water from salt mines or evaporation of seawater. Go out to buy salt, and you will be confronted with a range of choices. There are different kinds of salts- each with varied texture, shade, and cost. Which is better- table salt or sea salt? We put the age-old debate to rest.

No matter what kind you prefer, all salt is made of sodium chloride. Table salt is the most common variety that has been around for a long time. It is formed by evaporating natural salt, subjecting it to very high temperatures. This destroys most of its beneficial properties. It is then processed for purification, and all the other contaminants are removed. In this process, even the essential minerals, which are a part of its chemistry, are also stripped off. So that it flows freely, anti-caking agents like magnesium carbonate, silicon dioxide, and sodium aluminosilicate are added. These hamper the salt’s ability to absorb moisture from the air. Then iodine is added to it to avoid iodine-deficiency diseases.

This is the salt that is obtained from the seawater. When the sea salt is crystallized from open-air evaporation, it is usually sold at a higher cost. The vacuum evaporation method is quicker as compared to open-air evaporation as the product thus obtained is cheaper. This salt can be sold in its unrefined form or a more refined avatar. When it is coarse, it has a grayish tinge due to clay and sediment impurities. Algae, minerals, and marine bacteria add to its color and flavor. Refined sea salt is washed to remove the minerals, sediment deposits and is purified much like the table salt. Depending on the manner in which it was crystallized, it can be flaky or not.

Sea salt has traces of iodine but not as much as iodized salt. Care must be taken that in the times that we live in, our seas and oceans are not bereft of pollution. The biggest threat is microplastics, but then they have infiltrated everything.

Table salt vs. Sea salt: Which is Better?

Sea salt has gained popularity in recent times. Most chefs prefer to use that in their dishes as it has a stronger flavor and provides an element of crunch. It might be more popular as a healthier alternative but the point to be noted is that the sodium content in both- sea salt and table salt- is the same.

Those who are in favor of sea salt argue that the difference between table salt vs. sea salt is akin to the difference between refined flour and refined sugar as compared to whole wheat flour and palm sugar. They believe that since the industrial processes have stripped the salt of any positive qualities by processing it until it reaches a bare minimum of nutrition. Those who differ in their viewpoint believe that the amount of salt consumed daily is so less that it hardly makes any difference.

The presence of trace minerals is another point of difference. Sea salt has more percentage of magnesium and potassium and calcium. However, they are present in such minute quantities that the variation in table salt is negligible. Since these minerals can be obtained from a well-balanced diet, it hardly makes sea salt better than table salt.

Table salt vs. Sea salt: What is the real difference?

The only benefit of choosing sea salt over table salt is that one will avoid anti-caking agents and other additives in the more natural form. So whichever option you want to depend on your preference of taste, texture, and color, use that salt in moderation to avoid problems of high blood pressure. Many people give up eating salt entirely and begin showing signs of deficiency like muscle cramps, decreased hydration, weakness, headaches, cognitive decline in older adults. It has many benefits like:

Eating salt helps you to stay hydrated. Water follows salt. So if you want to have sufficient fluid balance, you will need to eat salt.

Salt prevents muscular cramps due to the presence of electrolytes. Without proper amounts of electrolytes, the body will suffer from fatigue, nausea, seizures and irregular heartbeat.

Nerves require salt to conduct their impulses. By cutting out salt entirely from your diet, you will create a neural imbalance.

Many dentists’ advice rinsing the mouth with salt water to ward off cavities, improve gum disease, sores, ulcers and infections in the mouth. It soothes inflammation in the gums.

While the table salt vs. sea salt debate is still on, the main focus should be on ‘moderation’. This is they key to good health, i.e. consume salt moderately and cut down on processed foods.