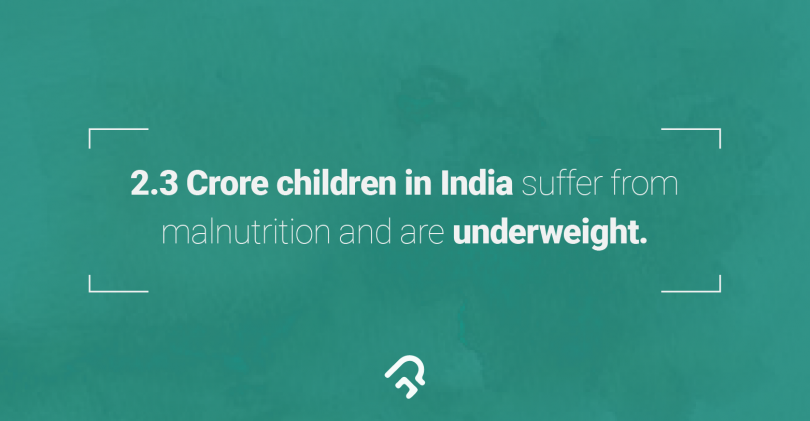 Nearly 50% of the deaths of children under the age of 5 are caused due to Child Malnutrition.

Over 2.3 crore children in India suffer from Tackling Child Malnutrition and are underweight, according to a status report on the anganwadi (day care center) programme, known as ICDS. This makes 28% of the total (8 crore) kids that attend day care centers.

This is a quick read through of the small steps taken by AAM to eradicate malnutrition in India.

Action Against Malnutrition (AAM) is an NGO monitored crèche initiative. It kicked off in the small hamlet of Bada Doomartoli near Ranchi in 2013 with an aim of eradicating malnutrition in India. The project started with baseline surveys conducted by the NGOs in the villages where majority of the population either comprised of tribal people or belonged to the scheduled castes. The citizens had paltry access to government services and healthcare facilities, with wasting and stunting prevalent among the children.

The NGO has converted a house and its verandah into a crèche, where mothers leave their children as they leave for the day’s labor. At the crèche, the workers play with the kids, feed them and monitor their physical growth. The children are fed a diet rich in calories, comprising of potatoes, sugar, milk, fruits mainly. Eggs are a part of the meal atleast twice a week. They also weigh the kids once a month and check their height once every six months. Since the closest functional community health center is 18 kilometers away from Bada Doomartoli, the AAM crèche is the immediate go to for mothers of Bada Doomartoli and is doing wonders to tackle malnutrition in India.

AAM stresses on regular feeding, and maintenance of hygiene up to the age of three to reduce the risk of the child being undernourished. Illnesses diagnosed are immediately catered to and severe cases are taken to the nearest healthcare center. The number of children suffering from Child Malnutrition in India has reduced to one third since AAM has taken over.

In the three years that they are functional, the AAM movement has spread through four states, set up 139 crèches and monitored over 4,304 children.

After the failure of ready-to-eat supplements, the community based approach of AAM seems to hold promise. It focuses on preventing malnutrition rather than tackling it. It encourages the women of the village to help in collectively be it by donating clothes, toys, etc or by dropping by at the crèches and helping with the work, as and when possible. As a result of all the hard work 84 percent of the children showed an improvement in the health condition.

As promising as the scenario seems, AAM is running low on funds to sustain the crèche model. There is no guarantee that the Jamshetji Tata Trust continues to fund it , and the state governments too seem doubtful of shelling out even the small sum of one lakh a year, which is all that these crèches run on.

These initiatives are a drop in the ocean right now, but they aren’t disseminating without making ripples. And the government needs to realize that.