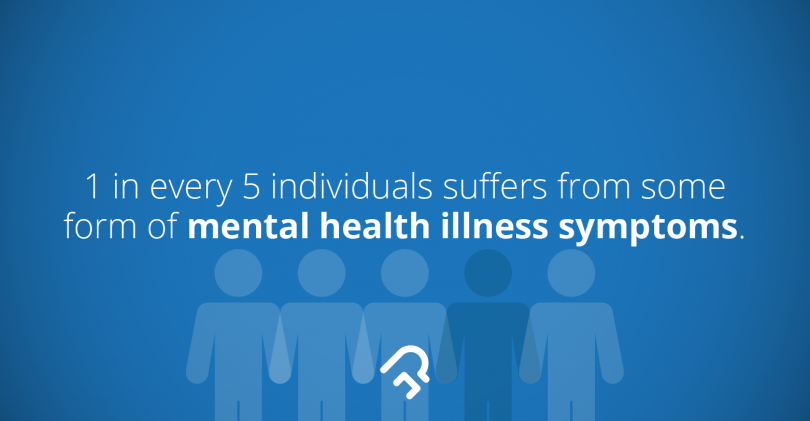 Mental Health Illnesses is about a person’s mental and emotional well-being. Good mental health or being mentally sound would mean that one possesses a balanced mind, confidence, and self-esteem. A mental illness is a problem that significantly affects how a person thinks, perceives, and reacts.

Statistics show that 1 in every 5 individuals suffers from some form of mental health illness symptoms. 50% of mental health conditions begin by age 14 and 75% of mental health conditions develop by age 24. Mental illness can be triggered by a multiple factors. Complex interactions between mind, body, and environment result in psychological disorders. Some of the factors are long term acute stress, biological factors, drug abuse and overdose, cognitive behavior like constant negative thoughts, low on energy, etc, social problems like financial problems, breakdowns, isolation, etc.

Mental health in India is still a fairly new topic and the mental health myths and taboos attached to this subject are prevalent to this date. According to the National Health program by the Ministry of health and family welfare, 6% of Kerala’s population has mental disorders. 1 in a 5 has some emotional and behavioral problems. Close to 60 to 70 million people in the country suffer from common and severe mental disorders. India is the world’s suicide capital with over 2.6 lakh cases of suicide in a year. WHO statistics say the average suicide rate in India is 10.9 for every lakh people.

There are a few factors/ reasons that contribute to these reasons,

Ignorance: the first and foremost reason being awareness and knowledge. People use words like ‘mad’ and ‘asylum’ carelessly. There are far too many derogatory and demeaning terms used to describe someone who is mentally not fit and this stigma or taboo coupled with ignorance and lack of awareness discourages people who are suffering to speak up and reach out for help.

No insurance for mentally ill: Insurance companies do not provide medical insurance to people who are admitted in hospitals with mental illnesses. Admission to a good hospital is out of reach for some because of this. A good treatment doesn’t come cheap and without an insurance cover, it becomes even more difficult.

Mental illness can be treated with the right kind of support, for the psychosis illnesses, right medication under the right guidance is very important and for the neurosis illness, getting a good counseling, support and love from peer circle and family plays a crucial role. Reaching out or identifying these problems at an early stage is very important.