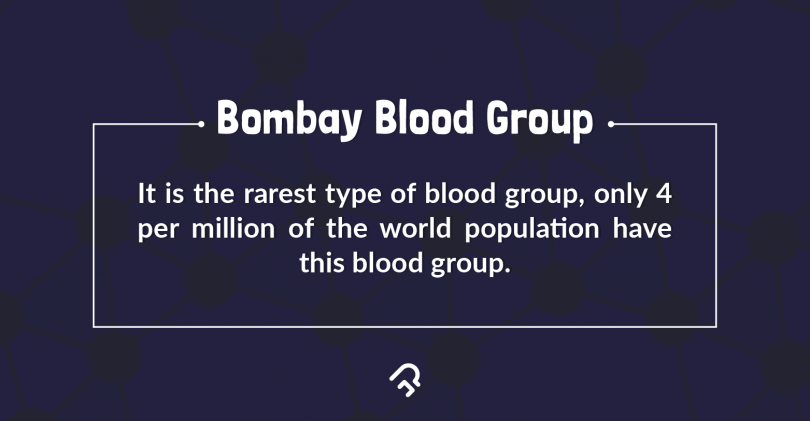 It is the Rarest Blood Group first discovered in Mumbai (then Bombay) in the year 1952 by Dr. Y.M Bhide and that’s how it got its name.

How was it discovered?
This incident happened when a patient was admitted to the KEM hospital and required blood transfusion. During the regular blood diagnosis, the red cells in the blood were grouped like that of O group and hence blood with blood group O was transfused to the patient. The patient eventually developed a hemolytic transfusion reaction and the blood transfusion was stopped.

Later, in a detailed study of the patient’s blood, a new blood group was discovered and was named as Bombay blood group also called as the HH group.  All the blood groups primarily contain a protein called the H antigen. The antigens A and B are made from the H antigen. So, when someone has the A blood group, it means that they have the antigen of type ‘A’ and antibody of type ‘B’ in their blood. Similarly a B blood group person has antigen of type ‘ B’ and antibody of type ‘A’ in his/her blood. Blood group AB has both type A and B antigens in their blood but no antibodies, whereas ‘O’ blood group has ‘A’ and ‘B’ antibodies and no antigens. The HH or Bombay blood group do not produce this H antigen, subsequently not producing either A or B antigen. They only have the ‘H’ antibody which none of the other blood groups have due to which blood transfusion for the Bombay blood with any other group is not possible.

This very rare phenotype blood group is generally found in 4 per million of the world population. In Bombay, it could be present in 1 per 10,000 of the local residents. In India, there are about 179 people known to have the Bombay phenotype blood group. Interestingly in the year 2010 in Bangalore, a 42 year old father Mr. Annappa was found to have this rare blood group when he wanted to donate blood to his ailing son. That made the total count of people to 180 in India. This blood group is commonly mistaken as ‘o’ and might not be identified if proper blood grouping or testing practices are not followed. Mr. Annappa’s blood group initially showed up as ‘O’ with no reaction to Anti-A and Anti – B antibodies. Repeated testing was done to perform the reverse grouping and confirm the Bombay blood type. People of this blood type can receive only their blood type. In most diagnostic centers where blood tests are done, only the presence and absence of AB and RH is tested in the blood. Since Bombay blood group do not possess the A or B antigens, it is usually comprehended as the ‘O’ blood type. It is only after a specific test for H Antigen in blood is performed which can make a distinction between Bombay blood group and ‘O’ blood group. Blood transfusions for the Bombay blood group with any other blood type may lead to a fatal hemolytic transfusion reaction. To be on the safer side, if one is of the blood type ‘O’, make sure it is not the Bombay blood type through proper testing at a standard diagnostic center.

So if you or any of the people you know if of Bombay blood type, get them registered in the Bombay Blood group organization and at various blood banks, so that someone may be able to help you or you could help them in case of emergencies. As a precaution, it advisable to be cautious and alert at all times to avoid blood emergencies. Visit PharmEasy to order medicines and schedule diagnostic tests.

If you’re suffering from high blood pressure, read this for a know-how on dealing with it.