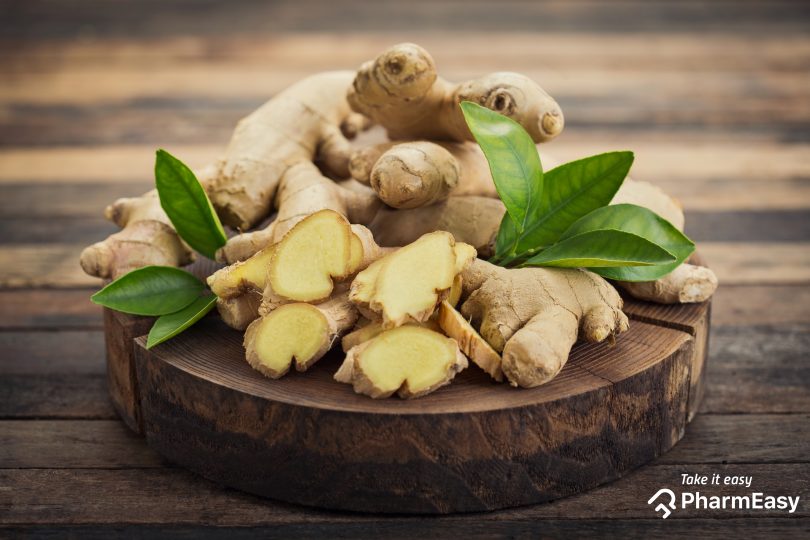 Ginger has been used as a medicine and spice since ancient times throughout the world. For centuries, it has been an important ingredient in traditional Ayurvedic, and Unani medicines for the treatment of different diseases. As ginger has contents like vitamin C, zinc, carotenoids, zinc, iron, phosphorous, copper, manganese, fiber, and proteins, it has numerous health benefits to offer.

Based on various studies conducted in the past and use in traditional medicines, ginger has some potential health benefits to offer.

How does it work?

Ginger has antioxidant properties. Hence, it is very effective in disorders caused by excessive oxidative stress in our bodies.  Also, it has antibacterial properties and protective effects on the cells of our nervous system. Traditionally, it has been used to treat various bacterial infections and memory impairment due to the aging process. Ginger has anti-inflammatory and antiemetic effects too that provide relief from pain and vomiting.

Can we treat nausea and vomiting with the use of ginger?

Ginger and its antioxidant effects

Antioxidants are substances that protect your body from the oxidative stress produced during diseases such as neurodegenerative diseases like Parkinson’s disease, and Alzheimer’s disease, various cancers, smoking, and the aging process. Ginger helps to prevent these diseases and works as an effective anti-aging agent too.

Can ginger be used to relieve the menstrual cramps?

Menstrual cramps, also known as dysmenorrheal are a common occurrence these days. Clinical research says that ginger can provide pain relief if taken during the first 3-4 days of painful menstrual periods. This pain-relieving effect of ginger has a mechanism very similar to that of analgesic medicines of the modern era.

Do you know that ginger is effective in relieving the symptoms of osteoarthritis?

Due to its anti-inflammatory and pain-relieving properties, ginger helps to reduce the pain and inflammation associated with osteoarthritis. Clinical studies show that local application of ginger oil or ointment is an effective way to reduce osteoarthritis of the knee.

Apart from the above-mentioned health benefits, ginger is also effective in illnesses like respiratory disorders, migraine, atherosclerosis, obesity, and colds. However, the clinical data supporting these benefits is limited.

Are there any safety concerns with the use of ginger?

Ginger is a possibly safe medicinal plant product. As per the US Food and Drug Administration (FDA), ginger is categorized as generally recognized as safe (GRAS). It can cause mild side effects like diarrhea and heartburn in some individuals. It can cause irritation of the skin when applied topically.

Is it safe to take ginger during pregnancy?

We have limited data on the use of ginger in pregnant women. Most clinical studies show that ginger does not cause any harm to the baby. However, there are some reports of miscarriage in pregnant women taking ginger for morning sickness. It is advisable to talk to your doctor before taking ginger for medicinal purposes during pregnancy or you can avoid its use during pregnancy.

To summarize, ginger is an easily available, relatively cheap herbal medicine that offers numerous health benefits. We should take the maximum benefit from this medicinal plant that has been an important part of our culture and Ayurvedic system of medicine.