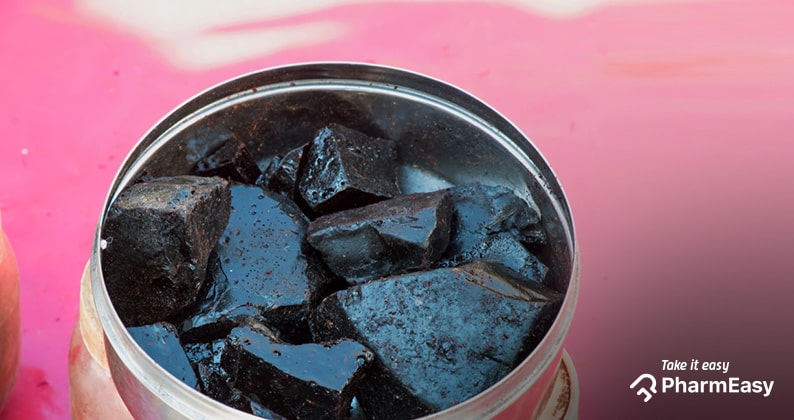 Shilajit, also known as “conqueror of mountains” and the “destroyer of weakness” is a natural, tar-like substance found in mountain ranges of Himalaya. Shilajit is popular as a rejuvenating age-old natural substance for enhanced energy, vitality & potentially helpful in improving various health conditions.

As per a recent study, shilajit helps in maintaining muscle strength and aids connective tissue adaptations.[3]

In this article, we will take a closer look at the various Shilajit health benefits.

Shilajit has been used for centuries by people all over the world for achieving good health. The benefits of shilajit have been attributed to the high concentration of minerals, fulvic and humic acids in it.

The substance is being used for years for increasing the levels of testosterone in men. Men who consume shilajit have a higher sperm count and sperm motility. Both these factors determine how well a sperm moves towards the egg, which in turn determines the chances of conception.

According to research, men between the ages of 45 and 55 were treated with shilajit consecutively for 90 days.[2] The total testosterone levels were significantly increased among them after that time period.

The various compounds found in shilajit is useful for improving your brain function. As per a study in the International Journal of Alzheimer’s Disease[1], shilajit slows down the process of ageing and increases longevity. The components of shilajit help in reducing the risks of cognitive problems, such as Alzheimer’s.

This is because the fulvic acid in shilajit prevents the formation of tau. This is a protein responsible for forming neurofibrillary tangles, which in turn leads to Alzheimer’s disease.

One of the primary causes of anaemia is iron deficiency. You may suffer from anaemia if you do not have enough haemoglobin in your blood. It can cause fatigue, headache, weakness and irregular heartbeat. Shilajit can help you as it is packed with high levels of iron and humic acid, which will stabilize your blood iron levels.

Among the various shilajit benefits, curing altitude sickness is one. At high altitudes, people suffer from breathing troubles, fatigue and body pain. As shilajit has more than 80 minerals, including humic and fulvic acid, it helps patients with altitude sickness.

Shilajit also enhances the brain’s cognitive abilities, reduces inflammation and boosts your immune system. All this helps to reduce the symptoms of altitude sickness.

Shilajit does this by controlling the ageing process and maintaining your vitality. This is because of fulvic acid, which is one of the key constituents of shilajit, has anti-inflammatory properties and functions as an antioxidant. Thus, it reduces the cell damage in your body and also the production of free radicals in your body, both of which cause ageing.

Perhaps the most important of the several shilajit health benefits is how it benefits the heart. Shilajit increases the levels of glutathione, an antioxidant. This is good for your heart. Moreover, humic acid reduces blood cholesterol, which in turn reduces the chances of a stroke.

Shilajit can increase the dopamine secretion in the brain. This may reduce anxiety and stress levels.

Shilajit also has a calming effect on your body. This is due to the high levels of potassium and magnesium. These components relax your muscles, including those of your heart. This soothing effect can help in lowering the levels of stress.

Shilajit can protect your gut from problems such as inflammation and oxidative stress. It has benzoic acid, which is antibacterial in nature. May help in preventing gut infections and other problems of the gut.

Shilajit is available as a supplement or in powder form that can be consumed along with water or milk. As discussed earlier, it can be very effective if used properly.