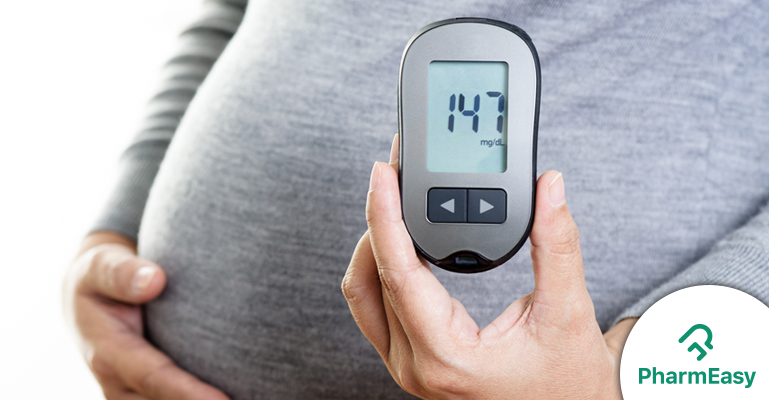 Gestational Diabetes in pregnancy is when pregnant women, who have never shown symptoms of diabetes, develop high blood sugar due to their pregnancy, it is known as gestational diabetes. In most cases, women develop this condition for the first time in their pregnancy, but in rare cases, it might be that an undiagnosed case of diabetes has worsened.

The human body uses insulin, a hormone released by the pancreas, to metabolize food into glucose which is the smallest unit of energy that the cells can use for biological processes. Pregnancy is a time of massive hormonal changes. The way a woman’s body uses insulin changes while she is carrying a baby. The body becomes slightly resistant to insulin so that the fetus receives more glucose for optimal growth. In some cases, the process goes a bit haywire, and the body becomes utterly resistant to insulin or stops producing it in enough quantities. This leads to high blood sugar levels, and the condition is known as Gestational Diabetes.

The high glucose levels in the blood can cause many complications for the mother and the baby. In most cases, the routine tests catch the problem in its infancy. However, it is essential to always be on the watch. Read on to find out more about the risk factors, symptoms and what you can do if you have gestational diabetes in pregnancy.

The reason for some women developing gestational diabetes is because of their placenta. HPL (human placental lactogen) is a hormone produced by the placenta. It helps in the baby’s growth, but it also alters the way the mother metabolizes carbohydrates and fats. It increases the woman’s resistance to insulin, and this raises the blood glucose level, so the baby gets the extra glucose for growth. After 15 weeks of pregnancy, another hormone, Human Placental Growth Hormone, is released. This is also a growth hormone and raises the mother’s blood glucose levels further. In most cases, the body adapts and keeps the sugar levels from getting too high. When the mother’s body cannot control the raised glucose levels, she is said to have gestational diabetes.

There are many risk factors associated with gestational diabetes in pregnancy.

Women above the age of 25 years are more likely to get gestational diabetes in pregnancy.

Those who are overweight or obese (a BMI of more than 30) are at high risk.

Those with a family history of type 2 diabetes are more prone to gestational diabetes.

Women who have had a history of PCOS are more likely to get gestational diabetes.

Women who have had prior pregnancies with gestational diabetes and have had large babies are more prone to suffering from this condition.

Al women go through a routine screening test for gestational diabetes between the 24th to 28th weeks of pregnancy. A Glucose Tolerance Test is administered. In this, the woman’s blood sample is taken in the morning when she has an empty stomach. Then she is told to drink a glucose solution. After two hours, another blood sample is taken to find out how the body has processed glucose.

Most women can control their condition by sticking to the exercise and diet regime that their doctors have chalked out for them. Those who cannot are given anti-hyperglycemic medicines. Some might even need insulin injections which are given thrice-a-day. You will have to maintain tight control over your blood sugar as it leads to severe complications if it gets too high.

Complications Due to Gestational Diabetes

If the mother has gestational diabetes, the baby is at risk of the following scenarios:

High amounts of glucose lead the baby’s body to produce extra insulin. This can make them grow very large. The downside of this is that the baby may get stuck in the birth canal because of being overweight and may require a cesarean operation.

Sometimes, mothers of babies who have gestational diabetes go into early or preterm labour. This increases the chances of the baby suffering from respiratory distress syndrome as its lungs would not have developed properly.

Since the babies produce more insulin to deal with the increased glucose in the mother’s blood, when they are born, they have a surplus of insulin. This produces low blood sugar levels right after their birth. If left untreated, it can lead to seizures and other complications. Usually, in such scenarios, a glucose solution is given to the babies to return their sugar levels to normal.

The babies of mothers who have had gestational diabetes are prone to type 2 diabetes in the future.

Gestational Diabetes in Pregnancy: Complications for the Mother

Gestational diabetes increases the risk of having high blood pressure which leads to a condition known as Preeclampsia. It can be fatal if left untreated.

If you have gestational diabetes, it increases your chances of suffering from type 2 diabetes in the future.

Prevention of Gestational Diabetes in Pregnancy

If you are at risk of developing gestational diabetes, no one can be sure that you can prevent it by following these tips. However, if you can adopt these habits before and during your pregnancy, you keep the odds in your favour.

Choose fresh fruits, whole grains, and nuts to incorporate nutrients and fibre in your diet. Control your portions and keep away from junk food. Read more diet tips for diabetes management.

Being active will ensure that you keep the weight gain to a minimum and prevent gestational diabetes. Choose the activity that you enjoy and get started. Not just your weight, it will help lift your mood

No doctor will encourage weight loss during pregnancy. So, lose the pounds before you conceive to have a healthy pregnancy.

Read More: 5 Types of Foods to Avoid in Gestational Diabetes