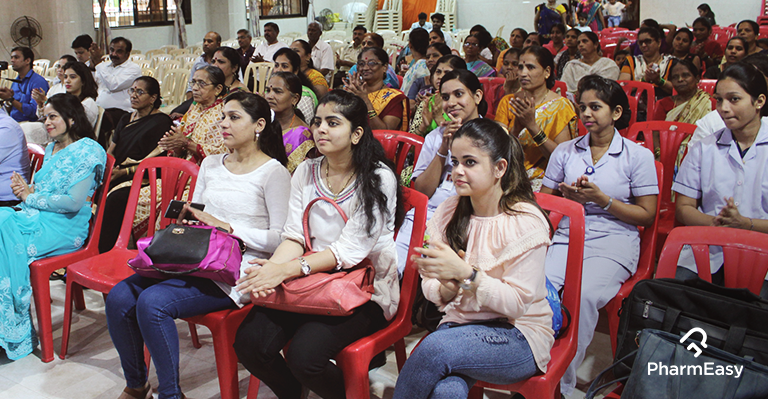 Women’s Day cannot be just about women, but it is about the society surrounding these women, especially their families. Women’s progress has a high correlation with the support from their families. Mumbai Policewomen are also no exception to this. However, Khakee women and their families always have to deal with different types of challenges and issues. Hence Kohinoor Group had arranged a unique event ‘Khakee ke Sathi’ dedicated to Mumbai policewomen and their families on this Women’s Day, in which more than 250 police families participated and also underwent medical check-ups. Social activist Harish Sadani, gynaecologist Dr. Anjali Talwalkar and vice president of Kohinoor group Mr. Atul Modak were present at the event organized at Dadar.

The program started with an exciting street play based on gender sensitization and gender diversity presented by student leaders associated with an organization MAVA– Men Against Violence and Abuse. The street-play titled as ‘Gender Bender’ (in Hindi) was a 20-minute gripping play that talked about Gender Diversity like Transgender, Gay, Lesbians, and other sexual minorities. It also spoke about traditional notions of masculinity and femininity and the newer ideas about being a man and a woman. An interactive session followed this skit by Founder of MAVA, Harish Sadani. This session indeed made the audience speak out their thoughts, problems, and solutions to it.

Then a gynaecologist, Dr. Anjali Talwalkar took charge of the stage to present detailed information about cervical cancer, breast cancer and other types of cancers in women, which helped our police ladies to understand that timely precautionary measures can solve half of the problems.

Vice President of Kohinoor group Mr. Atul Modak said on the event, “The reason we chose to celebrate women’s day with Policewomen and their families is that we believe in gender equality. Mere women empowerment is not sufficient for healthy society. There has to be a perfect balance between these genders hence we decided to also focus on our men this time. Apart from this, Kohinoor has a close and promising relation with Police forces. We have been doing many social activities for Police, Railway police, and Traffic Police. We have great respect for these forces, and such types of events are one way to salute them.

This was followed by a brief career guidance session presented by Kohinoor representatives Mrs. Poulomee Bondre and Mrs. Archana Dhawale.

The last yet most important session at the event was health check-ups for all policewomen. More than 150 policewomen underwent the medical check-ups. The program ended with complimentary snacks for all.